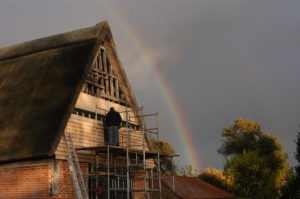 Old Manor Farmhouse is believed to have been built for a wealthy wool merchant in 1650, though it is probable that there was an earlier property on the site dating back to the origins of the wool trade. Worstead, in the same parish, was the heart of Englands wool manufacture from the 1400’s.
Through to the 18th century Norwich was the second city of England. It was a busy wealthy cultural capital, heavily settled by the Dutch and Huguenots escaping religious persecution. The Norfolk coast is as close to the Netherlands, just 113 miles, as it is to London and in medieval times it only took a day to sail to Amsterdam, but four days to travel to London. At that time Norfolk was isolated by muddy marshland and dense forest so we have always looked to the Continent. The Dutch helped create many of Norfolk’s trades and brought techniques to harness the waterways as in the Polderlands creating the Broads. The relationship began with fish but flourished in the thirteenth century when wool was exported through the Broads to the weavers of Flanders. Then weaving started in Norfolk assisted in the 1560s by refugee Flemish weavers (who brought with them their now-famous Canaries, remembered today in the nickname of Norwich City Football Club!) The wool weaving, spinning, dyeing and finishing trade in East Anglia was the financial backbone of the region until the middle to late seventeenth century and has left an architectural footprint still visible today in the Dutch gable ends you see on Old Manor Farmhouse. Old Manor Farmhouse’s west and east gables, as Pevsner puts it, show the kind of strapwork frills that are characteristic of Vredeman de Vries’s engravings and of Dutch buildings of around 1600. 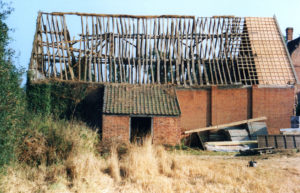 Norfolk’s prosperous links with the Continent waned with the coming of the Industrial Revolution, but at least that means we still retain so many of our old buildings – they were never demolished for ‘progress’ as Norfolk fell back on it’s agriculture.
Agriculture in the 17th century was very prosperous with the Lord of the Manor taxing the surrounding tenant farmers. The huge threshing barn, Hoste Barn, is testament to its prosperity as a farm. Threshing would have taken place in the winter on the threshing floor in the central bay, the width dictated by the width of a pair of oxen and loaded wagon. The threshing floor was covered with oak planks to withstand the flail and the large doors left open to promote a through draught. The grain was scooped up in baskets and tossed in the air (winnowing)so the light chaff would blow away. However in the first half of this century it was hard to earn a living through farming and Old Manor Farmhouse gradually decayed. It was uninhabited since 1950 but still farmed, being known colloquially as Howlett’s Farm. The farmhouse and tithe barn escaped the ‘modernisation’ of the last century and therefore retained all of their original features. 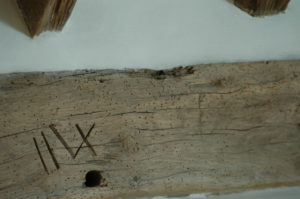 There are a number of the timber wall supports still remaining amongst the 18th century brick infill which helps to date the barn back to between 1600 to 1650. These have been preserved and displayed within the restoration. The building has been re-thatched using Norfolk reed and the roof fully repaired. In common with most timber framing joints, mortice and tenons were secured by timber pegs when the final erection of the building occurred. You will see various carpenters marks at these joints (up close next to the bath). 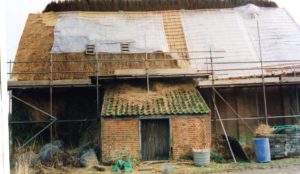 This outstanding roof dominates the light filled space being visible in its entirety throughout the barn. The internal conversion to living space has been done in a very simplistic modern style thereby accentuating the beauty of the raw vernacular building.
Working with the same builder, Malcolm Rose, who was instrumental in the gaining of the Graham Allen Award for the house restoration, we were able to realize our ideas with Malcolm’s practical implementation, and produce a property of immense substance. At no point did we compromise the agricultural history of the barn and therefore the experience of living within this space is truly unique.

We use cookies on our website to give you the most relevant experience by remembering your preferences and repeat visits. By clicking “Accept All”, you consent to the use of ALL the cookies. However, you may visit "Cookie Settings" to provide a controlled consent.
Cookie SettingsAccept All
Manage consent

This website uses cookies to improve your experience while you navigate through the website. Out of these, the cookies that are categorized as necessary are stored on your browser as they are essential for the working of basic functionalities of the website. We also use third-party cookies that help us analyze and understand how you use this website. These cookies will be stored in your browser only with your consent. You also have the option to opt-out of these cookies. But opting out of some of these cookies may affect your browsing experience.
Necessary Always Enabled
Necessary cookies are absolutely essential for the website to function properly. These cookies ensure basic functionalities and security features of the website, anonymously.
Functional
Functional cookies help to perform certain functionalities like sharing the content of the website on social media platforms, collect feedbacks, and other third-party features.
Performance
Performance cookies are used to understand and analyze the key performance indexes of the website which helps in delivering a better user experience for the visitors.
Analytics
Analytical cookies are used to understand how visitors interact with the website. These cookies help provide information on metrics the number of visitors, bounce rate, traffic source, etc.
Advertisement
Advertisement cookies are used to provide visitors with relevant ads and marketing campaigns. These cookies track visitors across websites and collect information to provide customized ads.
Others
Other uncategorized cookies are those that are being analyzed and have not been classified into a category as yet.
SAVE & ACCEPT
Powered by